This past weekend we visited our friends Lynne Connellee and Noel Rodriguez in Buda (just 25 min. south of Austin). As soon as we entered their home, wafts of roasted garlic and caramelized onion reached our noses, and Noel, who had been peeling roasted eggplant, put down his knife to greet us. This was going to be good.

For appetizers, they served Eagle Mountain artisan raw milk Gruyere – aged one year – and pasteurized milk French Camembert. Noel had picked it up while he was at a cheese-making class in Granbury, TX. After we noshed on the cheese and some roasted eggplant bruschetta served on homemade five-grain bread, Noel and Lynne gave us a tour of their yard.

A beautiful pool was tucked behind the kitchen, neighbored by a garden filled with everything from artichokes to winter squash. Behind the garden was Noel’s woodworking shop – which he affectionately dubbed “the dog house.” Along the back fence and bordering the rest of the yard were many varieties of fruit-bearing plants: a mulberry tree, grape vines, a peach tree, a pear tree, cacti, and several plants whose names we don’t remember but whose flowers were meant to attract rare migratory species of moth and butterfly. Shading the back porch and house were pecan trees planted by Lynne’s son and a fig tree which had been in her family for generations.

After the tour, we sat down for what would turn out to be one of the best homemade meals of the year – even better…we didn’t have to cook it! Dandelions from the yard had been fermented into wine and then used as the base for a tangy ginger sauce for the venison loin (hunted by Noel, of course). Lynne had prepared warm Danish-style potatoes and a carrot and fennel slaw with fennel fronds, parsley, and sun-dried tomatoes.

For dessert? Cactus fruit sorbet cut with a bit of chile piquín, served with homemade lemon almond cookies. Clearly, Noel’s assertion that they like to incorporate the fruits of their garden in their food was a serious understatement. 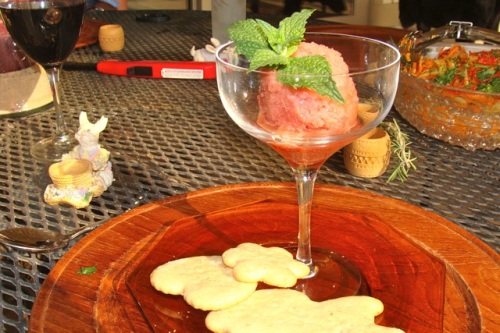 Which reminds us of another understatement, said by Lynne in reference to their home in Buda, “It’s not much, but it’s ours.” We respectfully disagree…it’s a lot more than “not much.” It’s a little oasis in a sea of homes where the only place families gather is around the TV screen and most of the meals that are considered homemade involve prepared ingredients. If we could all incorporate at least one meal like this one into our weekly routine, we’d be a long way towards improving the health of our bodies and our families.

Roast the eggplant, yellow onion, and garlic tossed with extra virgin olive oil, oregano, and sea salt in an oven at 350 degrees F for about 30 minutes. When the eggplant is very tender, remove from oven. Allow vegetables to cool, then peel and chop them. Sauté with butter and breadcrumbs. Butter the bread, cut it into quarters, and then toast until golden brown. Top the bread with the eggplant mixture and sprinkle with Parmesan cheese. Broil for about 1 minute.

Coat the venison loins in a mixture of pepper and rosemary to form a nice crust. The loins should be at room temperature. Pan sear the loins in clarified butter or vegetable oil over high heat. Cut into medallions and serve on top of Dandelion Wine Reduction with a side of sautéed Portabello mushrooms.

Pick flowers (heads only) and wash them. Combine, in a very large pot or bowl, the flowers, orange, and lemon. Pour the boiling water over this mixture, cover, and let stand for 10 days. Strain the mixture and add the sugar to the liquid. Mix well so that sugar is dissolved. Spread ½ ounce of yeast onto one piece of toast and float it in the mixture. Cover and let rest for another 3 days. Strain the liquid (remove the toast), and put the liquid into sterilized bottles. It is ready to drink now, but it will improve with age. (I prefer to age it at least 1 year).

Scrub potatoes and boil in a large pot of salted water until fork tender. Brown the onion over medium heat in the butter. Combine potatoes and onion. Toss with sugar and apple cider vinegar. Serve warm or at room temperature.

Combine all ingredients in sorbet maker. Freeze until ready to serve. Garnish with fresh mint leaves and serve with Lynne’s Lemon Almond Cookies.